30 Yahoo Boys Have Been Arrested In Ghana, 29 Of Them Nigerians, One Is A Ghanaian, 34 Laptops Confiscated From Them As They Are Also Linked To A Dead Body After Police Raid 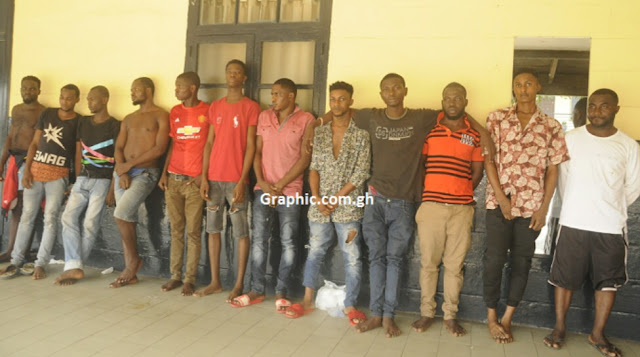 A suspected cyber crime syndicate was last Saturday busted by the Achimota Mile 7 Police in Accra. In all, 29 suspects, all Nigerians, were arrested in an early morning swoop on a house at Alhaji Tabora in Accra. 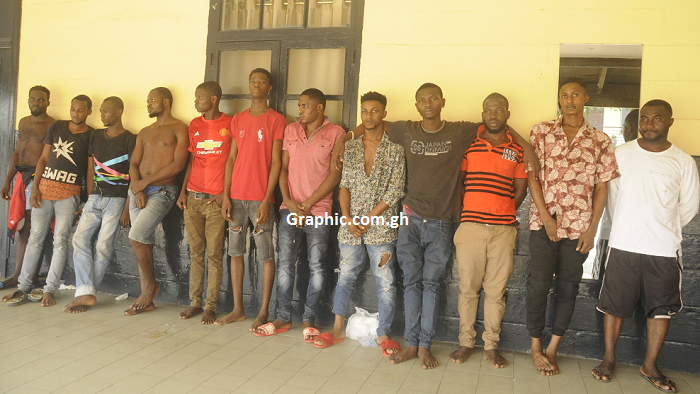 Retrieved from the suspects were 34 laptops and 48 mobile phones they allegedly used in committing crimes.
The suspects are also linked to a dead body that was found wrapped at the Apenkwa neighbourhood two weeks ago.
The suspects are aged from 21 to 30.
Another suspect, Peter Konadu Frimpong, 34, who was on top of a storey building videoing the police action, was also arrested.
The suspects
Among the suspects rounded up were Ike Ogu, 24; Ike Iduozi, 23; Blessing Adebayo, 25; Awudu Abdul Razak, 23; Daley Emmanuel, 26; Moses Madjaki, 30; Onaghnise Osahou, 24; Peter Andrews,25; Benjamin Akumeze, 25; Kelvin Osayi, 23; Oforufemi Adrigu, 25, Anthony Irughe, 22 and Kelvin Uche, 22.
Others were Timothy Irughe, 22; Elvis Uzeogbu, 24; Owen Zakari, 24; Joe Steve Obozu, 29; Festus Owubu, 25; Abraham Femi, 24; Suleman Abudu, 25; Abraham Femi, 24; Age Michael, 25; Philip Aghariaha, 25; Nathaniel Owobu, 27; Teddy Atigbin, 23; Henry Onege, 27; Daniel Ukuokolo, 21; Osas Uhuns, 22; Kelvin Ola, 23, Lucky Osahou,21 and Yakubu Dido, 26.
Tip-off
Briefing the Daily Graphic in Accra yesterday, the Accra Regional Police Commander, DCOP Osabarima Oware Asare Pinkro II, said the police, acting on a tip-off, kept the house under surveillance before conducting the swoop.
He said the police met almost all the suspects busily engaged in fraudulent cyber activities during the swoop around 7 a.m. last Saturday.
“The suspects were living together in one big house where they undertake their activities,” he added...
Link to dead body
On the dead body found at Apenkwa which was linked to the suspected cyber fraudsters, DCOP Pinkro said a search on the body revealed that the victim had been killed somewhere and dumped at the place.
Information gathered by the police indicated that the deceased was one of the Nigerian suspects who had gone missing.
“The information was that he was beaten to death and wrapped and dumped there for leaking the group’s activities to a third party whom we cannot name. They saw it as a betrayal. We are investigating this case, in addition to the cyber crime cases,” he said.