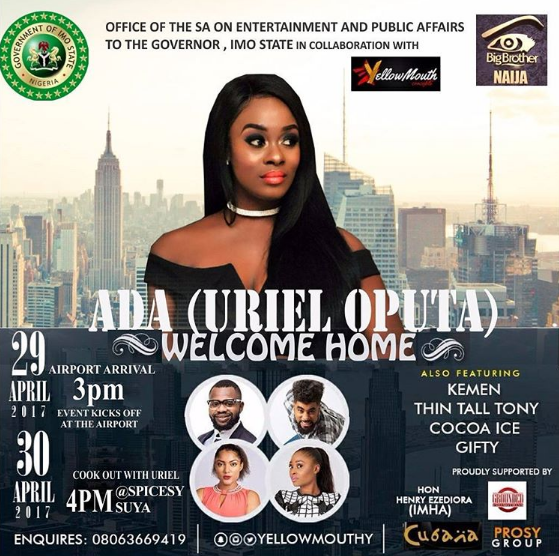 Barely a week after Uriel Ngozi Oputa took to her IG page to plead for a heroic homecoming exactly the way it was given to other former housemates like Efe, Bisola e.t.c the reality TV star is just about to get her wish.

She wrote then " Pls ooo I’m a princess too my Grandfather Vitus GoGo Okwuosa was a king … I want home coming..looool I’m baking my make up …. This is my Campaign to explore the East and I’m sticking to it lol"

Imo State government, through the office of the special adviser on entertainment and public affairs, has now finally agreed to this and is set to host the ‘Diary Sessions’ star on the 29th and 30th of April, 2017.

Uriel, who is an indigene of Imo state, stated that people should be disregard her accents as she is a proud Igbo girl.....Igbo kwenu!!! 3 gbosas


Read also: Couple uses son as collateral for 8000 naira only