Francis Agoda, popularly known as 'I go dye' has finally fulfilled his life long dream of doing something special for his mum. He built a very big mansion for his mum, painted white with patches of gold. 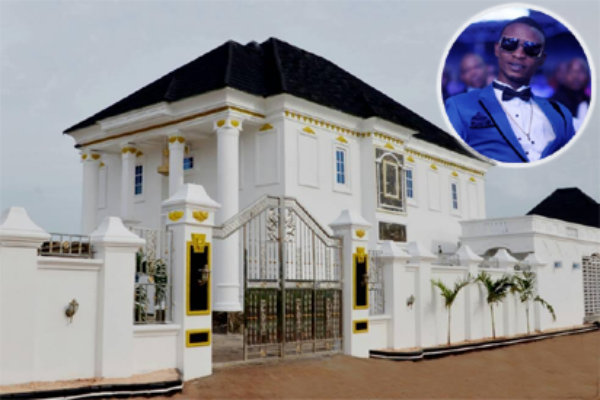 Although the precise location isn't known yet, but the picture has surfaced online.

I go dye who already celebrated his 20 years in the entertainment industry said it wasn't easy growing up. But he thanked God it's a grass to grace story.
See what he said below:

“Well, growing up wasn’t rosy at all, some said they had silver spoon but for me, there was no spoon at all, it was just creating means for myself to fend for myself,” he once said in an interview with Vanguard. “All my early days were spent in the village with my grandmother, who nurtured me with so much traditional values that later amused my peers when I got back to primary school in Warri.

There was so much difficulty for my age mates to comprehend my ideas and values of life. It was seen most times that I was saying things that were not achievable because they felt I knew more than my age.

I had difficulty also conforming to their standard and it took me sometime to study their moral upbringing, which had so much difference from the way life was in the village and living with an old woman. More so, the challenges of life are so much, it took me strong personal conviction to stand firmly on my belief and dreams”.