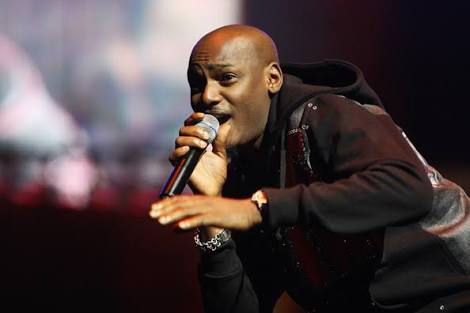 The award winning Nigerian artist 2face who is currently being known as Tu Baba has demonstrated good spirit of sportsmanship by celebrating with fans  of Arsenal FC after they won the English FA Cup last Saturday, beating Chelsea 2-1.

2Baba had made a surprise appearance during the FA Cup finals at two major viewing centres in Lagos.

At the beginning of the match, he shook hands and greeted fans before taking a seat to enjoy the match while drinking  Campari. During the halftime break, he performed his hit song, Implication, which really entertained the fans throughout the half time break. He also gave the fans free bottles of Campari and free Jerseys.

During the second half of the match, he left there and went on to watch the match at Esporta Suites, Magodo. After the match which saw Chelsea lose to Arsenal 2-1,  2face celebrated with the Arsenal fans despite the fact that his team lost. He cheered fans with selfies and photos. He also presented gifts to some of the lucky winners at the bar.