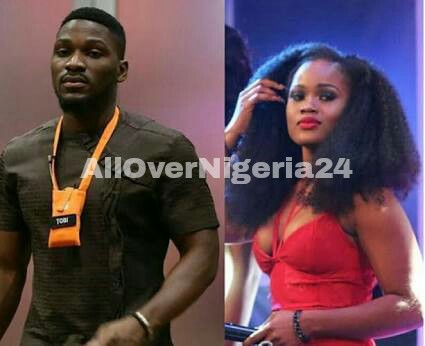 Celebrities and and followers of the reality show, Big Brother Naija ‘Double Wahala’, have reacted to Cee-C’s emotional outbursts on Wednesday morning.

Tobi, Miracle and Alex were getting ready for the day’s task when Cee-C’s  verbal onslaught erupted spontaneously. She stomped around the house raining insults on her former romantic partner Tobi.

The two, who became the first couple of the Big Brother ‘Double Wahala’ season, are not on speaking terms as a result of what can only be referred to as a long and complicated feud.

However, Viewers, are not pleased with the way Cee-C insulted her fellow housemate, Tobi.

Some the followers and celebrities took to their twitter handles to express their disgust over the situation.

Linda Ikeji with the handle, @lindaikeji, did not economize words when she said a woman should never talk to a man the way she did no matter how provoked she was.

Dear women, never talk to a man the way CeeC has spoken to Tobi today no matter how provoked you are. It’s almost a sin! And of course, it goes both ways! #BBNaija

I just watched the most bizarre live recording of #BBNaija. I’m still dumbfounded. One person going on a non stop tirade on another. Surely this must be some sort of abuse. Biggie is quietly nursing a pressure pot and anything that results out of its explosion will be his fault.

Isn’t it against #BBNaija rules to verbally abuse another housemate?

Cece is disgracing women. Can u imagine. And people still keep voting for her. What do u think someone like CeCe can offer. Gosh I felt so bad watching her insulting Tobi

TOBI is really a strong man
Let’s stand up for our men cuz this is what most men are going through at home but the woman runs back to the public for sympathy when there is any form of abuse. Say no to this kind of behavior cuz our men also deserves the best, they aren’t rebots.

Thank you ma!! Feminism is not about disrespecting men but levelling the grounds and serving that respect on all sides.

This is the reason why we have domestic violence….. Seriously most woman caused this at home nd the society blame their husband in our society …. We should learn to tolerate one another.

Whoever signed for Cee C as guarantor or referree must be a major shareholder in BBNaija.. No other explanation

We the viewers all know that biggie is protecting Cee C… She get away with everything she does… Break all rules without punishment. #Bbnaija

I don’t understand the show anymore. Rather biggie is promoting bad habits