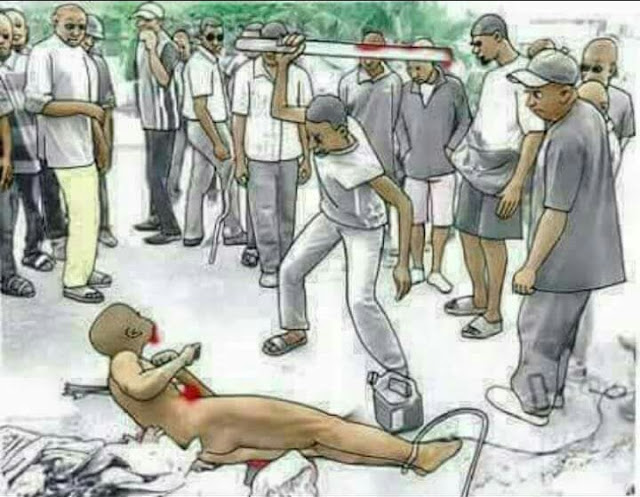 On a very hot afternoon, the sun was almost roasting my skin out of my body. It was 2pm, I was going to my house from the market. I waited patiently for bus to take me home, while I was waiting, i saw a young man between the age of 30-35years, properly dressed in white shirt stocked into his black plain trouser with a brown belt and brown shoe to complete his systematic arrangement, and i guess he was also waiting for bus, a lot of people were at that spot too. Soon enough, a long motorbus arrived and people starting moving into the motorbus, but then I was walking gently to the bus, admiring the color combination of this young man’s dressing also considering how dusty, dirty and scattered the environment was, with hoodlum (agboro) hanging here and there waiting for buses to come so they will load the bus and collect their normal 50naira.
Then all of a sudden, a lady shouted, olé olé, thief, thief, catch am, he steal my money, see am, na thief, you steal my money and you wan enter bus run, before you know it heavy slap from no where landed on his face. What did I do? He asked politely, you be thief the lady replied. Then those hoodlums picked wands of different sizes and started hitting him not minding his appearance. Tears was almost rolling down my eyes considering how dirty Dis guys hitting him and clean and orderly he was dressed. Bernard could not possibly be a thief judging him by appearance and look.
Shey na u dy thief ppl property for Dis market?? Today you go see, someone shouted approaching him with Barton. His white was gradually changing color combination with stains of blood from his flesh and before he could understand what is happening, he was already lying helplessly on that dirty ground, and gradually his shirts was flying out from his trouser and cutting down patch by patch.
He stole my money, olé, olé, thief, give me my money, she was still lamenting. How much hin still from you madam?? One of the hoodlum asked. My five thousand, this man na thief. Then they searched him and found five thousand naira and small small change, 100naira, 200naira and 50naira,. You see am?? This man na barrawo. The woman shouted. I can explain, please wait let me explain, Bernard pleaded exhaustingly, but the beating only increased because five thousand naira was found in his wallet, they were hitting him so hard that his flesh came out with the sticks as he was gradually going naked. Arrrrh, arrrrh, let me explain, I did not steal her money, Bernard continue to lament as gradually his voice reduced. Arrrrh, arrrh, arrrrh he could nearly say a word when they hit him stone and sticks.
Chaii chaii, see fine boy, see how em dress like banker, dy steal. Na wetin fit am, said one woman as she watch from a distance. I get fuel, me I get tyre, if you leave am, him go steal again. Then Bernard was almost naked because, they condemned his cloth on his body and then he was exhausted, I couldn’t help but watch from one end of the road with heavy tears rolling down my eyes. Then I saw dirty people that could not afford 3² meal a day contributing 300niara per litre fuel and tyre. The tyre was placed on his head and body, they poured the fuel on him and then one matchstick was enough to end his life in pain. Arrrrrrrrrrh, Bernard shouted in great pain as he struggled to get up but was exhausted. Those hoodlums turned away one after another as the heat from the fire on Bernard’s body was getting high. Bernard was gradually turning into black smoke and people that watched from distance all went sorrowfully away, Bernard died slowly but painfully. The woman watched how Bernard was dying and she heared someone calling "mummy mummy" she turned and then saw her son junior running towards her and on reaching her he said loudly dragging the crowds attention, "mummy daddy say make I give you this 5000 naira, say him carry am from ur bag. Eyes widened, jaw dropped and someone let out a cry "no be him steal the money oooo" but Bernard was just ash by then.

It was 9:00pm that day, Bernard’s wife( newly married with her 3months old baby boy) called her elder sis. Hello Ada, did you say Bernard came to shop today?? Yes, and I gave him five thousand to give to you, is he not back??? Oh my God, he’s not back. Where has he gone to?? My husband is not like that, he he had never returned this late before. Bernard’s wife replied with her baby in her hand. He will be back there, maybe he branched to see a friend.
This is my story and it’s all fiction. It happens everyday in our country Nigeria.