Lionel Messi's World Cup is over. The Barcelona star's hopes of crowning a glorious career by winning football's biggest prize was ended as a France team inspired by Kylian Mbappe overwhelmed Argentina.
With Messi having turned 31 this month, those in attendance at the Kazan Arena -- and the millions watching around the world -- could have witnessed the Argentine's final appearance on the grandest stage of all.
But while Messi's career is closer to its conclusion than beginning, those watching this last-16 tie caught a glimpse of the future as Mbappe announced to the world that he could be the man to take Messi's mantle as the world's best player.
The 19-year-old ran the show in France's 4-3 victory, scoring twice -- becoming the first teenager since Pele in 1958 to do so -- and winning a penalty for his team's opening goal. 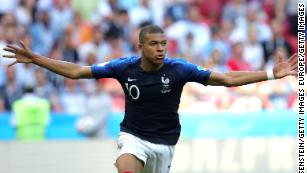 Mbappe celebrates after scoring France's fourth goal
His man-of-the-match performance, which dragged France back from a 2-1 deficit early in the second half, ensured the French become the first quarterfinalists of Russia 2018.