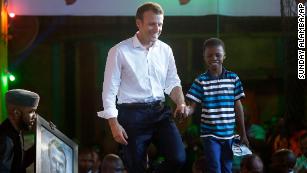 French President Emmanuel Macron, walks on stage at the New Africa Shrine in Lagos with 11-year-old, Kareem Waris Olamilekan, a young Nigerian artist who drew his portrait.
French President Emmanuel Macron has praised the skills of an 11-year-old Nigerian artist who drew a stunning portrait of him in only just two hours.
Kareem Waris Olamilekan drew a portrait of President Macron during his visit to Fela Kuti's New Africa Shrine in Lagos Tuesday.
Macron is currently on a two-day visit to Nigeria and attended a cultural showcase at the venue to announce the launch of the Season of African Cultural Season, scheduled to hold in France in 2020. 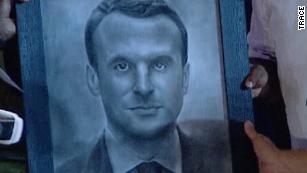 11-year old Nigerian hyperrealist artist, Kareem Olamilekan draws portrait of French President's Macron at the African shrine on July 3, 2018.
While waiting for the President to arrive, Olamilekan got to work and created a hyperrealist portrait of Macron, which was presented to him by the event's host, Nigerian singer, Banky W.
A visibly moved Macron touched heads with Olamilekan and later took to Twitter to appreciate his work.