When the decisive blows arrived it was the entire France squad in the victory scrum by the corner flag. Hugo Lloris, the goalkeeper, had run the entire length of the pitch. All the substitutes were disappearing under one another. There were even a few members of the backroom staff contemplating joining in, and who could blame them? France were on their way to their second World Cup and a party was already under way behind the goal where the tricolours were fluttering.

Not even Croatia, with all their powers of durability, could recover from the second-half goals that Paul Pogba and Kylian Mbappé scored in quick succession to open up a three-goal lead and ensure France will soon be wearing a shirt with two stars, rather than one, above their cockerel. Didier Deschamps has become only the third man in history to win the World Cup as a player and manager, standing alongside two giants of the game in Mario Zagallo and Franz Beckenbauer. Mbappé is a world champion at the age of 19 and, in the end, the embarrassing lapse from Lloris to let Mario Mandzukic pull one back for Croatia will not matter greatly.


France should be thought of as deserving champions, too, bearing in mind their assured performances throughout the tournament, and any team that scores four times in a final is entitled to feel euphoric. That, however, told only part of the story and it was difficult not to sympathise with Croatia bearing in mind the narrative of the first half in particular, when Mandzukic scored an own goal and France were awarded a penalty because of a borderline VAR decision that will always polarise opinion.


The game was still finely poised until Pogba made it 3-1 just before the hour with a left-foot shot after Mbappé and Griezmann had set him up on the edge of the penalty area. Pogba’s first effort came back to him off a Croatian defender. The second was more controlled, wrong-footing Subasic in the process, and when Mbappé strode away to fire in France’s fourth goal six minutes later it began to feel as if it could become a rout.

Instead Mandzukic took the ball off Lloris to make the final score more respectable and, with 20 minutes still to play, they kept pushing forward, trying to pull off an improbable feat of escapology. It was too late and the jubilant winners could soon be seen throwing Deschamps into the air. 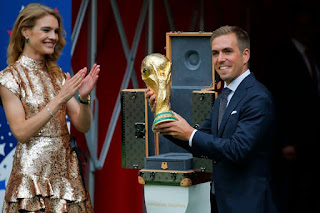 Former Germany Captain Philip Lahm brings the World Cup prior to the match. 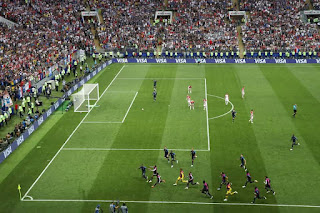 Great scenes as the substitutes vacate the French bench to join Pogba, the Manchester United midfielder. 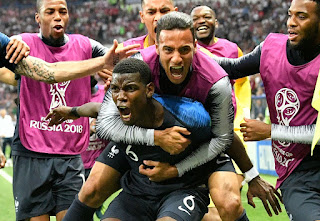 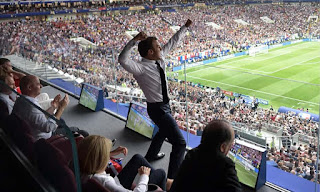 French President Emmanuel Macron was loving it in the stands. 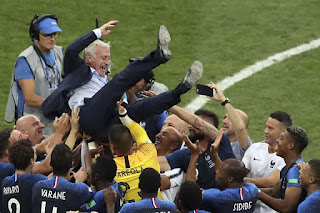 France have won their second World Cup – Didier Deschamps has now won it as both a player and manager. 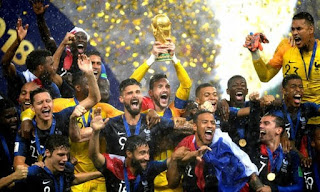 After a long delay and with rain pouring down, France captain Huge Lloris lifts the trophy. France are champions once again. 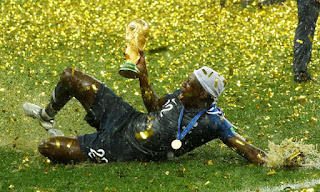 Theres only one way to celebrate with a World Cup in the rain ...