Corpses Burnt Beyond Recognition As Fire Guts Mortuary In Anambra 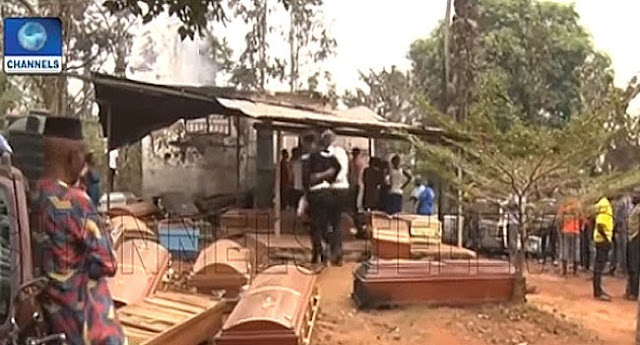 About 50 corpses were reportedly burnt beyond recognition in the fire which started at about 6pm on Saturday, December 29.

Families and relatives who deposited their loved ones were left in shock following the incident, which to many still remain a mystery as no explanations were given as to the cause of the inferno at the mortuary.

There were speculations that due to the harmattan period, the fire might have stemmed from a bush burning nearby and had grown extremely wild due to the chemicals used at the mortuary for the preservation of corpses.

A spokesperson for the police command, SP Haruna Mohammed confirmed the incident and appealed to the people to remain calm, noting that investigations were already underway.

While admitting that the cause of the fire is still unknown, Haruna assured the people that the command will ensure that “No stone will be left unturned in order to unravel the mystery behind the incident whether it is natural or manmade.

Meanwhile, Anambra state Governor, Willie Obiano, has visited the scene of the Enugwukwu General Hospital Mortuary fire disaster to see things as they really are on the ground.

He was accompanied by the state commissioner for Health, Dr. Joe Akabuike, senior police officers and other stakeholders.

The governor upon rounding off inspection of the site condoled with families affected and reassured them of his commitment to unravelling the mystery behind the fire outbreak.

Obiano announced that a committee will be set up to look into the incident.