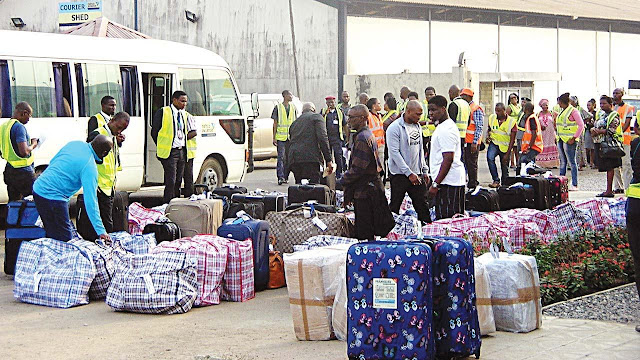 The Nigerian High Commissioner to Ghana, Michael Abikoye, has protested the inhuman treatment of Nigerians by the Ghana Immigration Service (GIS) with the deportation of 723 Nigerians between 2018 and 2019.

Mr Abikoye said this at a meeting between him and the Comptroller-General of GIS, Kwame Takyi, in Ghana, with report obtained by the News Agency of Nigeria(NAN) on Tuesday in Abuja.
The High Commissioner said 723 Nigerians were deported on alleged illegal stay, cybercrime and prostitution between the January 2018 and January 2019.
According to him, 81 Nigerians are deported on alleged cybercrime and illegal stay in January, while 115 have so far been deported in February on the allegation of overstay and prostitution.
The High commissioner cautioned against inhuman treatment of Nigerians by Ghana, warning that any form of torture or ill treatment of Nigerians would not be acceptable to Nigerian Government.
He said, though the High Commission would not condone any form of criminality on the part of Nigerians, saying inhuman treatment and alleged torture of some Nigerians in Ghana would no longer be tolerated.
“Although, the GIS had linked prostitution and cybercrimes as some of the reasons for the deportation, it is improper to deport Nigerians for alleged illegal stay in Ghana.
“There are several Ghanaians living in Nigeria and the Nigeria Immigration Service has never deported any of them on ground of illegal stay, because of a sense of brotherliness between our countries,” he said
The Ambassador, therefore, presented to the CG a copy of the Mission’s records on deportations of Nigerians from January 2018 till date.
He expressed displeasure that Nigerians were not being fairly treated, stressing that there had been reported cases of molestation, harassment and torture of Nigerians by GIS officials, especially those awaiting deportation at the GIS’s detention facility.
The Ambassador also showed photos of some of them who sustained injuries on their legs, arms and eyes in the process of the torture.