Showing posts from March, 2019
Show All

Lagos School Building: See before collapse and after the collapse photos

It was an unfortunate moment around 10AM on March 13th, 2019 when a 3-storey building house in the Ita Faaji area of Lagos Island collapsed. After the collapse, efforts and some agencies were deployed to save lives at the scene of the incident. Even though about 41 persons were saved, the number of casualties was unknown. About the building, the ground floor was the crèche/KG and the third floor was the primary school while first and second floors were residential. See before and after of the location
Post a comment
Read more 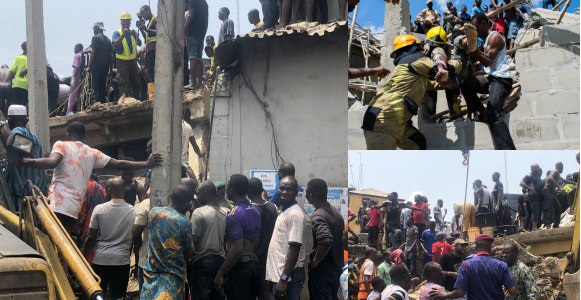 A Twitter user has revealed that a woman lost 5 children in the school building that collapsed in Ita-Faji, Lagos Island earlier today. Meanwhile, 19 persons including seven school pupils and 12 adults, have been rescued from the three-storey building that collapsed in the Ita-Faji area of Lagos Island today Wednesday March 13th. Rescue operations spearheaded by men of the Lagos State Emergency Management Agency (LASEMA) are still ongoing while the police and other security operatives are monitoring the security situation at the scene.
Post a comment
Read more

Bobrisky has shared screenshots of credit alerts he received in one day while asking his followers if they’ve made that much in their 20s. According to the unapologetic crossdresser, his goal is to make at least ?1 million daily and he meets his target most times. He went on to advise his followers to concentrate on making money rather than hating on him. Screenshots of his bank statement showed his account was credited with ?1 million at once today while yesterday he was credited with ?990,000. Sharing the screenshots he wrote: Good morning guys, what are your plans in life ? Have you ever asked yourself what you have achieve at your early 20. Many of you just want to be a follower forever praising celebrities . While some are just on Ig to open fake account just to insult you and after you block the account they open another one. Just imagine the time they are using to open those fake accounts they can make cool cash with that time they just wasted. Have you wished to be
Post a comment
Read more

In the name of money, some women are doing the unthinkable and it’s disgusting reading such stories and imagining the scenarios. They have sex with Arab men who poo from their anus directly into the mouth of these ladies all for dollars. The ladies also have sex with animals like dogs and camels. Well, below is a testimony from one of such Dubai Porta Potty. Read carefully because at the end you will never envy Dubai returnees who flaunt brand new cars and pictures of vacation in the Arab City. ******** "I called out a really good friend of mine for being a Porta-Potty after seeing her on TheDirty, and she admitted everything. By the way, she is 22, drives a 2011 CL550 and owns a Condo in Newport Beach(not bad for a girl that didn’t even graduate high school) so I wanted the same stuff. I asked her a few months ago about it and she told me when something opens up she will let me know. Christmas came and she told me that Jan. 5th there was a trip that she need 3 girls
Post a comment
Read more

A Thai millionaire shocked the world when he made an offer online to give the sum of £240,000 and a stake in his multi-million pound fruit farm to any young man who will win his virgin daughter's love and marry her (read here). But multi-millionaire farm owner Anont Rodthong, from Chumphon province, southern Thailand, already regrets his decision as thousands of young men have applied and they wouldn't stop calling his phone. Though Mr Rotthong is no longer interested in organizing the tournament to get a suitor for his daughter, he still plans to keep the promise he made to any man who marries his daughter. He promised to waive the compulsory dowry men pay to marry a wife. In addition, he promised to give the man £240,000 and a stake in his farm. Although he has other children, including sons to take over his estate, he promised to give most of it to his future son-in-law. He said at the time he made the offer: As soon as I have an in-law, I will give up all my
Post a comment
Read more

The governorship election is scheduled for tomorrow, Saturday March 9th.  See more photos of the state residents below queueing to get free kerosine from one of the governorship candidates
Post a comment
Read more

This 12 year old girl identified as Ikimot Awojoju, who reportedly went missing 5 years ago has returned back to her family. Ikimot went missing in Lagos on July 23, 2014, on her way back from school. According to reports, Ikimot was living with her guardian, Ajoke Abass, in the Oyingbo area of Lagos, before she went missing. Her mother, Faidat Awojoju, had passed away in 2011 when Ikimot was just three years old. When she went missing, Ikimot’s guardian said she sold her valuables to raise the money needed to search for her but all efforts to find her proved abortive. Abass told PUNCH Metro that after two years, she stopped searching but kept on praying for the safe return of the girl. Abass told Punchng.com: “Ikimot’s mother was an area sister to me and we took each other as family members. She already had a child before she got pregnant with Ikimot. The man responsible was not ready to accept the pregnancy and she wanted to abort it. I advised her against it and stood by
Post a comment
Read more
More posts