Bobrisky has shared screenshots of credit alerts he received in one day while asking his followers if they’ve made that much in their 20s.

According to the unapologetic crossdresser, his goal is to make at least ?1 million daily and he meets his target most times.

He went on to advise his followers to concentrate on making money rather than hating on him.

Sharing the screenshots he wrote:

Good morning guys, what are your plans in life ? Have you ever asked yourself what you have achieve at your early 20. Many of you just want to be a follower forever praising celebrities . While some are just on Ig to open fake account just to insult you and after you block the account they open another one. Just imagine the time they are using to open those fake accounts they can make cool cash with that time they just wasted. Have you wished to be celebrated too in Nigeria or all over the world ? If yes pls work hard don’t wait till you start answering sir/ ma for your age mate, it embarrassing. 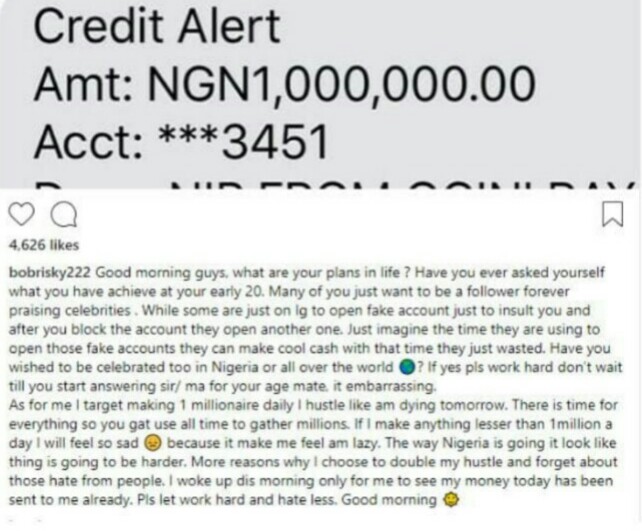 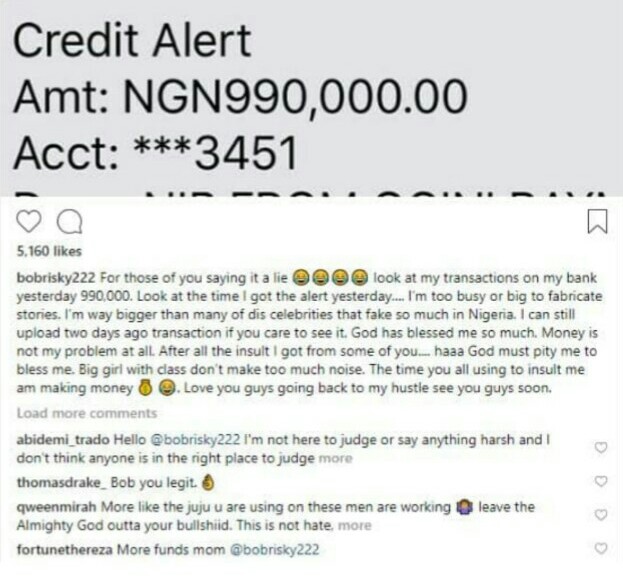 As for me I target making 1 millionaire daily I hustle like am dying tomorrow. There is time for everything so you gat use all time to gather millions. If I make anything lesser than 1million a day I will feel so sad because it make me feel am lazy. The way Nigeria is going it look like thing is going to be harder. More reasons why I choose to double my hustle and forget about those hate from people. I woke up dis morning only for me to see my money today has been sent to me already. Pls let work hard and hate less. Good morning

Two persons have been killed in renewed clashes among cult groups in Calabar, Cross River state. This is coming less than 24 hours after the brutal murder of James Chia, a final year student of electrical electronic engineering in Cross River University of Technology, Calabar Campus, on Monday. Chia was shot and axed to death immediately finishing his final paper in the semester in his faculty. The two persons were shot dead in the early hours of today Tuesday, July 16, at Palm street and CRUTECH pavilion field, Calabar South. It is however not ascertained if they are students of the school.
Read more
- May 20, 2017

Resident Doctors at the Olabisi Onabanjo University Teaching Hospital, Sagamu, Ogun State, have begun weekend  strike after their negotiations with the state government for improved pay collapsed. The doctors had embarked on a three-day warning strike over appropriate remuneration and appropriate hazard allowance et al which led to negotiations between them and the state government. It was learnt that the doctors under the aegis of the Association of Resident Doctors at the OOUTH were unable to reach agreements with their employers on some of their demands. In their   letter to  Governor Dapo Abiodun, they claimed  the state government   was  not committed to their welfare. The letter  jointly signed by the union’s president, Dr Popoola Mutiu, and the general secretary, Dr Osundara Tope, said  the association had resolved to work only week days and stay at home  during  weekends. They said they would review the decision depending on the response of the  st
Read more
- August 07, 2018

Man shows up for a date in a truck, lady turns him down A rich man identified as Karabo John Moa, has taken to Facebook to narrate how a lady turned him down for showing up for dates in his truck rather than his expensive fleet of luxurious cars. According to him, it has happened on three different occasions and it is just to show the materialistic nature of most women who will prefer you present yourself as a classic well-to-do individual. 'Just Got Back From the Shortest Date I’ve Ever Been On These Materialistic Ladies They see you in a Merc 1st Date,I Go Pick Her up in one of My Bakkies instead of my Merc I’ve Done it 3 Times now and all 3 times,Soon as I pull up at the gate,They Turn Around and Walk Away. She Says to me “You Don’t Take me Seriously ne ” The Security Guard at her Complex Gate and I had a Good Laugh … All Three Occasions I probably would’ve paid the Bill,So I actually Saved money I Ain’t Saying She a Gold Digger but she ain’t messing with n
Read more

Why Toyo Baby is no longer in Jenifa's Diary- JJC skills JJC Skillz, Funke's husband has come out to explain why Juliana Olayode,known by everybody as Toyo Baby,  doesn't feature anymore in Jennifer's diary. He also said he's not involved in the break up between his wife and Toyo Baby. JJC skills said 'I don’t know why Toyo baby left though but what I'm sure about is that it hasn't got to do with me. It's a TV series which is supposed to last long and so the only constant thing there should be change. Just like any character in a TV series, she can go and return. The only permanent character in the series is Jenifa. Falz has gone and he came back; Toyosi has gone and maybe will come back. He said below:
Read more