The "Pepper Dem" Big Brother Naija Housemates have picked Jeff as their new and first Head of House.

The housemates were assigned the task of selecting the Head of House, by spending the day getting to know one another. The reward, at the end of the day would be that the most deserving housemate would get the position of first Head of House. As simple as this task seemed, and according to big brother, there would be severe consequences if the housemate did  not select a "Head Of House" before light out.

The task, which was quite simple was written on a note and left on the table by Biggie shortly after he sent all the Housemates out of the House to the Garden. That wasn’t the last and the only thing Biggie did. He also told the housemates he hid 42 Bet9ja Coins in the House. He also said that the housemates, should look for the coins and collect as much as they could find.

And back to the note which was droped by Big Brother...
The note, which was read by Tuoyo. started off by congratulating Kimporah, on winning the first Veto Power Game of Chance and was asked to guard it even though she might not have the power to Save and Replace. 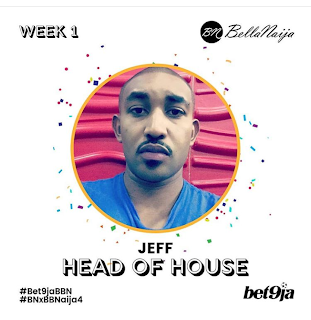 As the Housemates select "Jeff" as Head of House, will they rule their decision? We will all find out at the end of the week.